Home » News » Industry Encyclopedia » Are You Really Wrong When You Weigh Yourself?

Are You Really Wrong When You Weigh Yourself?

The number on the weight measuring scale is not the only factor when trying to lose weight. What matters more is how your body feels and how you feel about your body.

If you’re trying to hit a specific number, weighing yourself is a means to know if you’ve reached your goal. But common mistakes can alter your progress and make it seem like all your hard work is going nowhere. Here are five things you're doing when weighing yourself in the accurate weight scale that could give you inaccurate results. You’re weighing yourself at night.

After a full day of eating, it’s only natural that the number on the digital body scale will go up. Where else would those three meals go?

If you weigh yourself at night, you’re going to weigh more than you actually do, according to Discover Good Nutrition. Weigh yourself first in the mornings, after your body has had a full night to digest your food. Otherwise, you’ll be seeing higher numbers that don’t correlate to all of your hard work.

And make sure you’re not wearing normal street clothes and shoes. A study in the International Journal of Obesity showed that clothes can actually add up to two pounds on the weight measurer that doesn’t account for your actual body weight.

You’re weighing yourself every day.

Weight loss doesn’t happen overnight. Especially when you're on an accurate weight scale, you won't see much change. And certain activities, foods, and drinks can cause it to look, on the scale, as you’ve gained or lost weight. You won’t see major changes from day to day, and checking the scale this frequently can actually do more harm than good to your mental state.

In all reality, according to a 2008 study, you can only expect to lose one to two pounds per week. And you won’t see those results from day to day. Similarly, a different study found that new diets low in sodium and carbohydrates can make it look like you’re losing a lot of weight fast but that’s just due to glycogen storage fluctuations.

Try weighing yourself once or twice a week. This gives your body more time to regulate its weight and show you real numbers that highlight progress.

You’re only listening to the scale and not your body.

When you’re trying to lose weight, it’s easy to let it take over and become the only thing you think about. But doing so can affect your progress and make it seem like what you’re doing is never good enough. For instance, a study found that eating more sodium on some days than others can cause the numbers on the scale to spike — but that’s just because of water retention and has nothing to do with your body mass. Just because the numbers on the electronic scale aren’t moving, or aren’t moving fast enough, doesn’t mean your body isn’t changing. Muscle mass could be increasing, fat could be flying off, and endurance and stamina could be better than it’s been since your high school years. 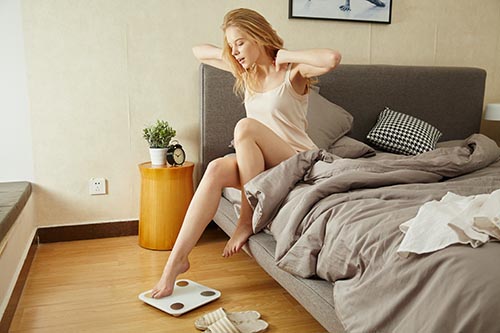 Not all scales are created equal, that’s just a sad fact we all have to live with. If you consistently check your weight on your bathroom scale, don’t go to the gym and weigh yourself there on the public scales. Because the mechanics are likely different. It’s normal to see up to a five-pound difference across scales!

In fact, one study about baby scale showed that 16 of 152 scales at a children’s health clinics were 100% correct.

Stick with one personal weighing scale to ensure you’re always getting an adequate reading — this way you’ll stay motivated and know that the changes are a result of your actions.

You’re hopping on the scale after a workout.

When you work out, you sometimes lose weight — according to a weight scale in the gym. But unfortunately, that’s not actual body weight. It’s just water weight.

For every pint or 16 oz., that you sweat, you will lose one pound of body weight. You will generally lose around 17 oz. during an hour run, or 8.5 oz. during a 30-minute run.

But that’s not an adequate depiction of your actual weight loss.Give your body a night to recover and check the next morning. Losing weight is a marathon, not a sprint. It takes time, patience and hard work.